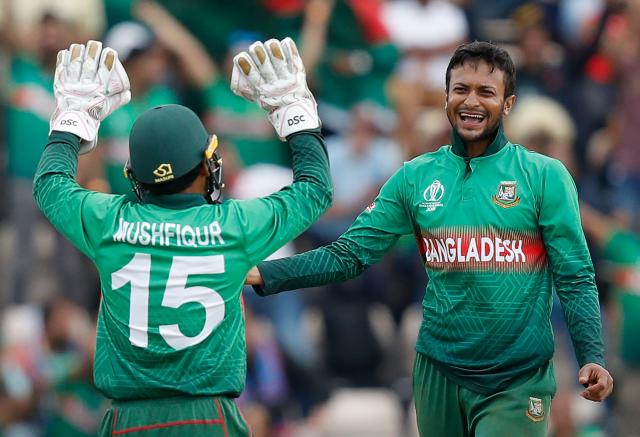 Shakib Al Hasan became only the second player to score a fifty and grab a five-for in a World Cup game as Bangladesh easily defeated Afghanistan by 62 runs at Southampton on Monday.

Till date, Indian World Cup winner Yuvraj Singh was the only player to achieve the feat, when he did so against Ireland in the 2011 edition.

Back to today’s game, it was one of the greatest examples of an all-round performance and the Bangladesh ace made a number of other records on the day, too.

It was the very first time a Bangladeshi took five wickets in a World Cup game. And that led him to an elite club of players who have hit a century and taken a five-for in the same edition of a World Cup featuring only Kapil Dev and Yuvraj Singh.

Four of the Afghan side’s top five batsmen fell victim to Shakib as the likes of Gulbadin Naib, Rahmat Shah, Asghar Afghan and Mohammad Nabi surrendered before the Bangladesh maestro.

Chasing 263, Afghanistan did make a good start, but once Man-of-the-Match Shakib made Rahmat (24) give a catch to Tamim Iqbal with the score on 49, the floodgate was opened.

Samiullah Shinwari was the top-scorer with an unbeaten 49 while Gulbadin Naib made 47, yet that were too little and the Afghans were all out for 200.

The fans were hoping Mushfiq would seal his second century in as many games, but the star batsman’s innings was cut short on 83 as Dawlat Zadran claimed his only wicket on the day.

That was the 49th over, but by this time Mushfiq and his fellow batsmen had given the team a defendable total.

The Tigers were denied a bright start due to a controversial decision when third umpire Aleem Dar ruled that Liton Das (16) was caught by Hashmatullah Shahidi off a Mujeeb Ur Rahman delivery.

Replays showed the ball probably had touched the ground, but Dar did not overturn the on field umpire’s decision.

Tamim Iqbal (36) and Shakib Al Hasan then added 59 in the second wicket partnership while Shakib and Mushfiq made 61 in the third wicket.

Shakib was trapped leg before by Mujeeb soon after he reached his half century, but his 51 runs made him the highest scorer in the tournament again.

After the fall of Mahmudullah (27), who was limping during his innings, Mosaddek Hossain fired 35 off 24 balls to take the Tigers past 250.

Afghanistan have lost all the seven games they have played so far, but this win sent Bangladesh to fifth, with seven points.

And their hopes of a semifinal berth is still alive.